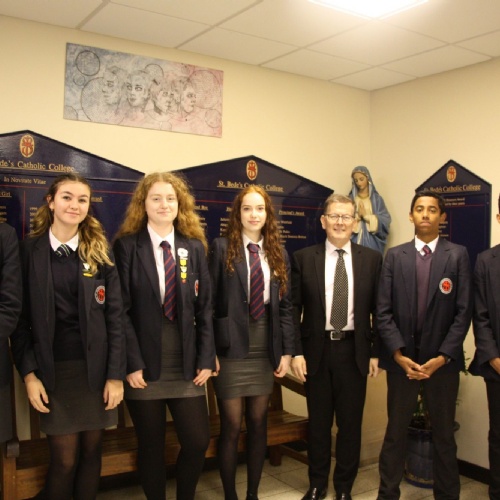 Our Year 10 team was made up of Laurie, Chris and Olivia.  Laurie delivered a thought-provoking speech debating whether 'The sole purpose of education is to prepare children for the world of work'.

The Year 11 team was represented by Isabel, Shawn and Ciara with Isabel tackling the title 'We lack confidence', an insightful speech which considered the perspective of the youth towards the government's response to climate change.

Olivia and Ciara took the difficult role of questioner for their teams and challenged the speakers brilliantly.  As Chairperson, both Chris and Shawn confidently led the debates and truly engaged the audience.  We are very proud of both teams as the Year 10 team were chosen to compete in the Bristol final, they will be joined by the Year 11 team who finished runners up on the night.  A special mention must go to Chris whose chairing performance earned him the well deserved prize of 'Best chairperson'.

Congratulations to all of you and good luck in January!